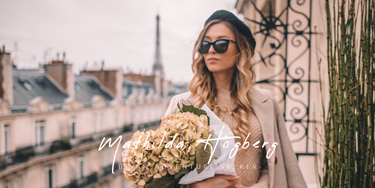 I took a leap, ended my 9 to 5 & started my own company. Currently traveling as much as I can, doing what I love the most,. My dream and goal in life is to see the world.

You're more than welcome to stay. Let's inspire each other!

The other day (last Saturday), me and Christian had a "photoshoot" and it couldn't gotten any worse than it did. Me and Christian went to Gothenburg from where we live to take some pictures, we had great ideas and we don't have that much time to take pictures on the weeks, so we only had that day to take them.

When we woke up in the morning it snowed, like heavily snowed.. At first I was happy, until I realized that snow wasn't perfect for pictures in the city, snow turns into water pretty fast in the city. Anyway, we ate some breakfast and then I curled my hair and put on my makeup. We ran to the car, by this time the snow had turned into rain and it was freezing outside. The car ride to the city only takes about 20-25 minutes, but at that time the rain had only gotten worse.. In the city, the cold and rain was to much for any of us to take more than a few pics before we needed a coffee break. When we were drinking some coffee, I realized my hair were almost flat and all of my curles were gone.. We decided to go home, it wasn't worth it, and our camera were wet aswell..

Anyway, when we got home, we decided to never have a photshoot on a rainy day again, even if we wanted to.
The comfort of our bed is greater than some pics, haha..